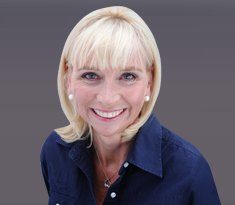 Dr Sharron Flahive is a Specialist Sports Medicine consultant having gained Fellowship of the Australasian College of Sport & Exercise Physicians in 2004 and being awarded the college medal for highest achievement in her fellowship exams. She was also the first female Sports Physician to be appointed to a professional rugby union team in 1999 when she was appointed as the NSW Waratahs Chief Medical Officer. She retained this role with the NSW Waratahs since the date of that appointment until the end of season in 2019, looking after the Team for 20 years!
NSWRU honoured this role in 2020 by awarding Sharron life membership. Sharron was also awarded the Joe French award by Rugby Australia for outstanding contribution to Rugby.

Dr Sharron Flahive may have wide recognition from her long-term involvement with the NSW Waratahs but her work transcends the sporting spectrum, from the first time or recreational sportsperson to the professional athlete. Her speciality is being able to assist all patients return to fitness and to resume normal participation in their work and life without pain and dysfunction (irrespective of their level of activity).

Patients of Sharron will note two features of her treatment. Firstly, that each patient is an individual that needs to be managed on an individual basis. Secondly, some patients do require further specialist investigation. It is the identification of the very best specialist medical talent for that patient's particular ailment in a timely manner that is critical. In all instances, a carefully calibrated management program designed for the individual and managed by the best medical care is what makes the difference in a patient making their best possible recovery. She transfers the principles of elite athlete injury prevention and rehabilitation to recreational athletes of all ages.

Pain from injury is seldom discerning. In time, neither the young nor the old outwit its unwelcomed embrace. It greets the genders with the precision of utmost political correctness. Weekend warriors, elite and professional athletes are all welcomed with equal enthusiasm. Not being able to exercise or work due to pain from injury is frustrating to us all ... irrespective of whether you are a recreational walker or a budding professional athlete.

Sharron has a passion about well-being, health and injury prevention. She has been involved in screening of athletes for many years and believes the same principles can be used with recreational and non-exercising individuals prior to commencing exercise if your overriding belief is that 'exercise is medicine'.

Outside of her team appointments and private practice, Sharron has a devotion to education, teaching and professional development within the Sport and Exercise Medicine field. In2021 she became a concussion and medical consultant on the NRL ( National Rugby League) Medical Advisory Panel, in 2019 became an Independent Director on the Board for IRP (International Rugby Players Association) and in 2020 accepted the position as Chair Of Training for ACSEP (Australasian College of Sport and Exercise Physicians).

For all appointment bookings and enquires with Dr Sharron Flahive please phone their office on (02) 8323 6500.

The Stadium Clinic offers an integrated team, for a unified approach to injury management & prevention.